Wiltshire Council’s work to support the Armed Forces was officially recognised by the Ministry of Defence at a special awards ceremony last night.

Baroness Scott of Bybrook, OBE, Leader of Wiltshire Council, met Prince Harry and Defence Secretary Sir Michael Fallon as, alongside her team, she was presented with the MOD’s Employer Recognition Scheme Gold Award. The accolade is the highest badge of honour for organisations that have signed the Armed Forces Covenant and demonstrated outstanding support for those who serve and have served.

Baroness Scott said: “Achieving this award is very special as it affirms the continued work we do to support our military community in Wiltshire, and our ex-service personnel who make their home in the county. It was a pleasure to meet Prince Harry and Sir Michael Fallon and to be able to demonstrate that here in Wiltshire we welcome those who serve and have served, and we value their expertise and skills.” 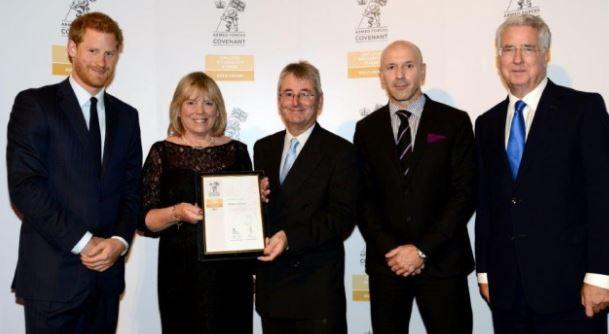