Eleanor Martin and Stephanie Gill are Analyst Programmers at Wiltshire Council, both had different journeys into their roles. They are part of the 26% of female engineers Wiltshire Council employs, this is much higher than the national 8%. Eleanor joined the team in May 2012 having previously worked as a software developer in the private sector and Stephanie began her career as an administrator within the planning department having worked for the council for 15 years. We spoke to them both about their backgrounds, careers and the advice they would offer to anybody looking into engineering.

Eleanor studied Mathematics and Psychology at university and entered the IT industry by chance, being offered a role as a software developer on the strength of an aptitude test, without knowing much about what she was getting into or that it would turn into an interesting and successful career.

Eleanor likes to get involved with all aspects of development including the initial meetings with the clients to find out what they need, planning the project, writing the code and delivering the project. Her favourite aspect of the role is ‘when a product goes live and you know you have made the client’s job easier.’

Eleanor, like her colleagues, is very happy in her role; the work is varied, every day is different, and she is continuously learning new skills. She says that, in general, the role is well paid, low stress and has a high job satisfaction rate.

Her advice to girls and women considering a career in engineering is that it covers many disciplines, so there are lots of opportunities to find an area that best suits your strengths and interests. “Although there are fewer women than men in the industry, this is changing and I’ve never been treated any less favourably than my male colleagues.”

As her role evolved, Stephanie became more involved in the reporting and use of data and played a part in updating the department’s website. She found that she was becoming more involved in the technical aspects of the role not just the input of data and content. Whilst in Planning, Stephanie undertook a secondment to the IT department. Over time she was called upon to undertake more specialist tasks and through natural progression and making the most of opportunities she was presented with reached the position of Analyst programmer. Stephanie has always had an interest in technology and the latest gadgets but never thought that it would be a career pathway.

Stephanie has been in her current role for just over 2½ years, and is very happy in her job; increasing her knowledge and skills. Reports, scripting and coding form part of her daily routine alongside the support provided in the creation and maintenance of the websites such as the Wiltshire Safeguarding Boards and the Active Health Websites. The automation of processes using ICT is a growing area, the development of forms within webpages and their use across various platforms and devices can make many people’s lives much easier

Following school, Stephanie completed an NVQ in IT, her father worked with computers and always hoped she would follow him into the industry. However, Stephanie’s passion at that time was to study English Literature and Psychology at A Level.

Stephanie’s team consists of 7 colleagues; 4 males and 3 females so in comparison to the national picture a relatively equal team; with various degrees of experience not all gained through traditional university routes. However, the industry is very male orientated; at a recent Microsoft event, 97% of attendees were male. But Stephanie’s advice to women interested in joining the sector is not to worry as the number of females is increasing. Stephanie added that there are many good free resources online such as those found on the Microsoft portal, Stephanie finds she learns best by doing

Stephanie worked on the Active Health Website project, which saw many aspects replaced and improved, it gives her a great sense of pride to know that her work is being used by others. Stephanie is also proud of her journey into coding, to be able to understand code and use it to create products puts a smile on her face. Visit to Microsoft in Reading was insightful given their ranking as a world brand. 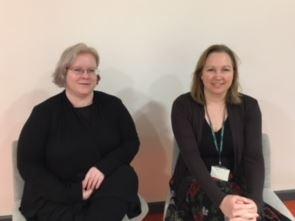