Office Evolution is a business that supply, install and maintain photocopiers and are based in Semington, just outside Wiltshire’s county town of Trowbridge.

We met up with Jarrett their most recent apprentice to learn more about his experience to date. Jarrett joined Office Evolution in August 2016 straight from school and has recently completed the college element of his apprenticeship and was awarded a Level 2 apprenticeship in ICT Software, Web & Telecoms Professionals.

Jarrett chose the apprenticeship route after weighing up his options; he liked the idea of learning on the job and earning a wage. He also considered the various options against his home life and didn’t want to go to college full time and find part time work during his evenings and weekends. Jarrett commented that he found it a bit strange joining straight from school as he had limited experience of the work environment and working full time. Before his apprenticeship Jarrett had helped in his uncle’s shop and undertaken work experience whilst at school.

Jarrett told us that a few of his friends were also interested in the apprenticeship route and the careers person at his school went through the various options open to them; he added that his Grandad did an apprenticeship in bricklaying when he was a young man and shared his experiences with him, reflecting that they had changed considerably over the years. Jarrett was not interested in ICT whilst at school due to limited exposure but this interest has grown since joining Office Evolution and attending Wiltshire College. The awareness he has of ICT helps him in his job and he feels accomplished knowing that he can set up and install a photocopier on behalf on the client.

Jarrett feels more mature than some of his friends who opted for the college and sixth form route; he pays his way and is gaining financial maturity all the time. Having applied for lots of apprenticeships when leaving school, he encourages others not to be put off as the right opportunity will come along.

Office Evolution recruited an apprentice previously; however, Phil McClounan, service manager, shared that the experience did not go well once the individual was in post. They held off recruiting again but in 2016 decided the time was right and engaged with Wiltshire College who supported the business in recruiting an apprentice and delivering the apprenticeship elements of the programme. Office Evolution is very keen to work with school leavers and local people when it comes to filling vacancies.

Some 30 people including Jarrett applied for the apprenticeship, Wiltshire College helped sift the number of candidates down to 6 for interview, and Jarrett blew them away with his positive attitude and enthusiasm for the job. Phil is a big advocate of apprenticeships having completed one himself and following in his own father’s footsteps. Interestingly Phil did his apprenticeship after completing university and appreciates the learning and experience gained from both routes. Phil can see the benefits that recruiting at a young age brings but also values the experience that older employees bring to the business.

As an employer, Office Evolution, invest not only time and effort but also financially in their employees and they are now reaping the benefits of their investment in Jarrett. 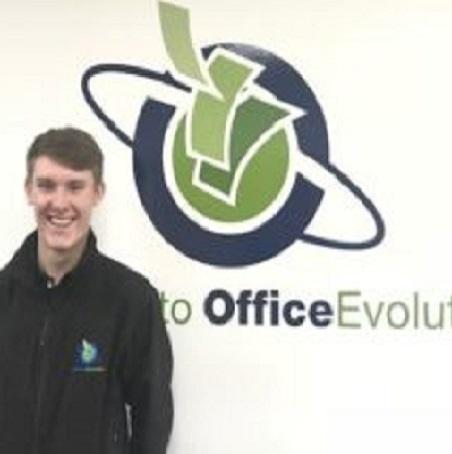