We spoke to Fiona Lambert, a Process Engineer at IXYS UK Westcode Ltd, based in Chippenham, Wiltshire about her journey as an engineer. IXYS UK Westcode Ltd are a world leader in semi-conductor technology and are keen to dispel the image of “hard hat and hi vis” engineering as IXYS requires a very clean environment for the work they do.

Fiona, who is originally from Morecambe in Lancashire, decided to be an engineer after seeing a “women in engineering” programme on TV at the age of 14. She focused on her GCSEs so that she could study Maths, Physics and French at A level. Fiona reflected that although it was a requirement to have A level maths, in the first year of university there was a lot of additional support to ensure students could progress within the course. Fiona’s High School did not offer a broad range of subjects; Fiona was one of only three students that did Maths and Physics at A level, and many of her classmates followed the GNVQ route, which reflected the employment opportunities in the area at the time.

Fiona graduated in 2005 from Loughborough University with a Master of Engineering, a 4-year programme accredited by The Institution of Engineering and Technology (IET) that would lead to Chartered Engineer status once in employment. Her first role was on a graduate programme at a company in Gloucestershire working in measurement, motion control, spectroscopy and precision machining. Fiona remained with the company for four years and was involved in manufacturing engineering and providing support to their electronic assembly lines.

Fiona then secured employment as a Process Engineer for a business that provides semi-conductor and systems solutions for aerospace and defence, communications, data centre and medical markets in Monmouthshire which saw her bring improvements to processes utilising new technology. Fiona was one of only two female technicians and often found the environment challenging in terms of old-fashioned attitudes towards women; however, this did not stop her from achieving the position of Senior Process Engineer. After six years it was time to move on which is when Fiona joined the team at IXYS.

Fiona has been at IXYS for 2 years as a Process Engineer, after six months she was awarded Chartered Engineer status awarded by the Engineering Council, which is one of her proudest moments to date. The process of becoming a Chartered Engineer involves putting together a portfolio evidencing competence in the following areas: innovation in engineering, engineering practices, improvement design, leadership skills in a project and communication skills, an interview, delivering a presentation and developing an action plan demonstrating continuous professional development. The process also develops a range of personal skills relating to ethics, outreach and environmental considerations, which Fiona could do through changes to regulations imposed that were intended to reduce an employee’s exposure to lead-based products such as in the soldering process.

Fiona told us that she experiences a good balance of work and interacting with people across the company and working very much as a team. Her day to day activities range from working in the laboratory and being in the office to supporting colleagues on the production line. Fiona shared that since working in industry she has understood the relevance and application of much of the theory taught at university.

Fiona is an ambitious woman, who thrives in engaging and supportive environments. She told us that she would love to lead a project and with the move away from fossil fuels and the development and sale of electric cars to mass markets believes that this opportunity will present itself in the not too distant future. 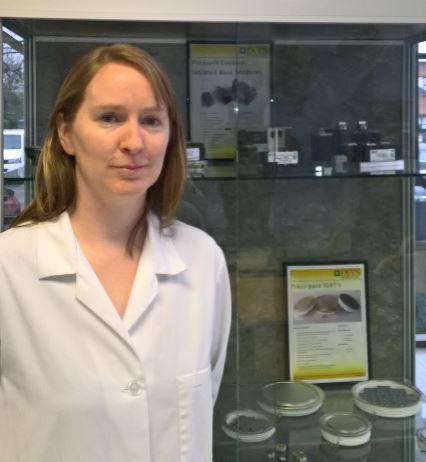