Andy Cole, Highway Engineer at Wiltshire Council works from the Wilton Depot covering the Amesbury and Tidworth area. We asked Andy about his career history and how he got into his role?

I left school at sixteen and I was lucky in that I interviewed for a role on Thursday and started the following Monday! It was an apprenticeship in horticulture at Newport Borough Council. I stayed there for eleven and a half years. During this time, I undertook a number of day release courses in all aspects of horticulture and turf management. I then moved to Carlisle City Council as a Grounds Manager for eighteen months before moving to Rugby Borough Council as Recreation and Amenities Manager for nine years. In 1997, I moved to Salisbury District Council as Senior Parks officer; when the Councils merged I transferred my skills and became a Highways Engineer. The opportunity to become an Area Highways Engineer came up via a secondment, I chose to apply and eventually secured the role permanently and haven’t looked back since!

What does your role involve day to day?

I work with my technician to resolve issues such as; checking the road condition and pot holes, drainage issues, liaise with our consultants on major maintenance schemes such as re-surfacing, reactive patching and surface dressing in my area. Checking/approving applications for skips, scaffolding, vehicle access, traffic signage – anything that relates to the maintenance of the highway. I also liaise with local town and parish councils over such matters and parish steward works. I also attend the Community Area Transport Group (CATG) meetings on road safety matters. Since October 2016 we have also become responsible for Section 38 adoption of new roads and highway infrastructure and overseeing that they are constructed to our agreed standards by housing developers. Due to the military rebasing project this currently takes up a lot of my time as there are a number of large developments being constructed in my area.

Finally, are there any myths you would like to dispel about engineering?

That we never get out of the office and spend a lot of time at the computer, but this is not the case. I don’t just pass things on – I like to be hands on where possible, for example I have tarmac in my van and I regularly find myself filling pot holes! Some people may also think we don’t care, but I most definitely do, working in such a great setting – for example Stonehenge is in my area – I take pride in my work. And the army re-basing programme is very important so I am pleased to be involved and assist where possible. 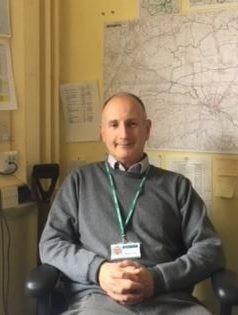