Martin Rose, Principal Engineer in Highways has been working at Wiltshire Council since 1990. He began his engineering career in a trainee role as a roads technician. We asked him how his career has progressed?

I studied alongside older more experienced colleagues, much like an apprenticeship. I completed a BTEC ONC and HNC in Civil Engineering via day release at college. I worked in the council’s road improvements team for four years before moving to the traffic engineering team in 1994. In 1999 I became an Incorporated Engineer (IEng) and was elected a fellow of the Institute for Highway Engineers (IHE). I am now a Principal Engineer which involves work around my speciality – which is the design of traffic and highway management schemes. I currently look after around eight junior staff. This includes helping them with their training, providing shadowing opportunities, visiting sites with them to enable them to develop confidence and knowledge. In a way, I have gone full circle, as I joined Wiltshire Council as a trainee myself.

I have also taken on other responsibilities including becoming an assessor for the Institute of Highway Engineers (IHE) for those looking to gain both Engineering technician (Eng Tech) and Incorporated Engineer (IEng) status. This involves travelling to London three to four times a year to interview and assess candidates. Internally I am the designated highway engineer for a number of Community Area Transport Groups (CATG) which are sub groups of the Area Boards that aim to find solutions to local highway issues. I work with local councillors to advise them on what is best practice from a highways point of view. In the future, I hope to continue my development and step into a managerial role.

We asked Martin about his proudest moment and what he would say to others considering entering engineering?

One of my proudest moments to date would be the work on the A350 Chippenham Phase 2 improvements where I was the acting council supervisor for this project. What I find most enjoyable about my role is that I can see what I’ve designed being constructed and delivering worthwhile improvements for the public.  Sometimes as Engineers we may only be a small cog in a much larger wheel but our input is still vital. To those considering working in engineering I would say take a leap of faith – you will be surprised what you get out of it. Personally I feel the sector is accessible for women as well as men, I have seen that change over the years. I think women are just as good if not better as engineers as they bring a different set of skills to the job, for example they work well under pressure and often approach complex situations from a different perspective.

Finally we asked Martin what he thought about the future of engineering?

I think it’s really important we think about succession planning, we need to be passing on our knowledge and experience to the younger generation. Engineering is a great career and holds lots of opportunity. Hopefully we can continue to show this and encourage people to get involved. 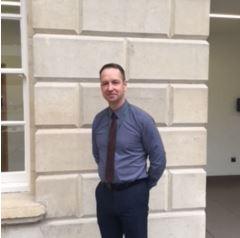