Harry Toogood, 18, is finishing his apprenticeship in Customer Services in October 2019 after 18 months of studying. He is working Aster Group based in the Devizes offices. Once completed Harry will be moving to the lettings team in a new role which will include administration and reviewing applications for tenancy. We met Harry to talk about his apprenticeship journey as he reflects on how far he has come.

How did you get into your apprenticeship?

I left School after a year of A-Levels as I didn’t enjoy Sixth From so I looked for a job, which is when I started in the call centre at Aster at the age of 17, I worked in that department for 6 months and then moved to reception on an apprenticeship. I was interested in the role because I would be more the face of Aster rather than a voice and people would know me throughout the business.
I actually never thought of myself as an apprentice, I didn’t think of it as an option and I didn’t think many people did them. My family thought it was a good idea as I would be earning a wage! My parents also said it is good to get experience in a work setting.

Why is Aster such a good employer for apprentices in particular?

At Aster there is a mixture of opportunities with different areas to progress into. In my role I work with people who come into reception with queries and I open the post and decide where it needs to go and scan documents for the rest of the business. So, I have been given real responsibilities and I have learnt how to deal with different situations and learnt new communication styles. It is also good pay for apprentice.
My ambition is to work within the Neighbour team – have my own group of people and patch to work with every day.

What advice would you give to others considering an apprenticeship?

Actually look into apprenticeships, don’t ignore the option. There are more benefits via an apprenticeship than just going to college. Don’t go to College just to follow your friends or do a course if you’re not 100% sure about it. For example, doing a customer service apprenticeship can open more doors to find other jobs and give you good basic skills.

After spending 18 months on your apprenticeship what is your proudest moment to date?

My proudest moment is definitely winning Apprentice of the year at the Aster awards. The company puts on an away day at Salisbury Race Course, there are various awards and I won in the apprentice category out of 206 nominations! 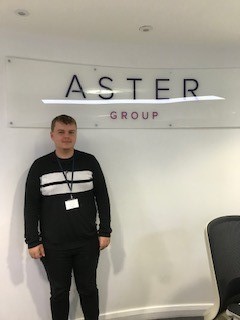