We had the pleasure of meeting staff of the Rt Hon Claire Perry MP at the constituency offices in Devizes, this included current apprentice Mitchell Reason and former apprentice Georgia Mundy.

Georgia is no stranger to being in the spotlight having featured in the Gazette and Herald and the Wiltshire College website, she also documented her activities during National Apprenticeship Week 2018 through her personal Facebook page.

Georgia, now 21, became an apprentice in 2015, this was the first time Rt Hon Claire Perry MP had employed an apprentice, her contribution to the government’s commitment to see 3 million apprenticeships created by 2020.

The former St John’s School pupil was unsure of her career path but knew she didn’t want to go to university. Georgia saw the apprenticeship advertised online, at the time she was not particularly interested in politics but did history at A level, in addition to English Language and Photography and felt that the Business Administration apprenticeship would cover a broad range of tasks and help her future career choices.

Having been successful in her application Georgia found that she had to hit the ground running; during her time as an apprentice there was an EU referendum (2016) and General Election (2017). In addition to the daily tasks and study requirements of the apprenticeship Georgia had to complete an ICT qualification as this was not one of the subjects she studied whilst at school or sixth form.

Upon completing her apprenticeship Georgia was fortunate enough to secure a permanent role as Parliamentary Secretary for Claire based in London. The role requires Georgia to manage Claire’s London diary, correspondence and policy casework, often liaising with current apprentice Mitchell back in the Devizes office.

Georgia now lives permanently in London, except during parliamentary recess when she returns to the local office, Claire helped her to find lodgings with a local MP and his family.

Reflecting on her time in the role Georgia has achieved far more than she thought possible, and certainly had more opportunities than if she had opted to go to university; including a visit to the European Parliament in Brussels organised through Parliament.

Mitchell Reason, 19, joined the team in January 2018 and is due to complete his apprenticeship in the next few weeks. A former Lavington School and Devizes Sixth Form pupil, Mitchell told us he was unsure that he would pass year twelve and be able to carry on studying Double Health and Social Care and Applied Science A levels, and therefore, started considering other options during Year 12.

At school Mitchell felt that he and his peers were told very little about apprenticeships, the focus was on university, something that Georgia also agrees with, therefore he had to do a lot of research for himself. Mitchell looked for opportunities on the Find an Apprenticeship website and found the vacancy for an Apprentice Constituency Assistant in the office of the Rt Hon Claire Perry MP. During this time, he also made the decision to drop the Applied Science course whilst continuing to work towards and achieve a Double Award A-Level in Health and Social Care.

Following a successful interview, Mitchell was offered the apprentice role, he was fortunate that Georgia had been through the process so he always had someone to turn to for advice. He told us that there is no such thing as a typical day, tasks can include managing the incoming and outgoing mail, preparing case work and maintaining and retrieving parliamentary records; which detail items discussed and actions carried out during Claire’s role as a local MP and Minister of State at the Department for Business, Energy and Industrial Strategy. There are times when Mitchell is required to be in Westminster supporting the Rt Hon Claire Perry MP; Mitchell is currently organising a tour of the Houses of Parliament for 50 local volunteers.

Social media has changed the way MP’s can engage with the public, platforms such as Twitter and Facebook allow members of the public to access their local MP more easily, however this is not always used positively and Mitchell and Georgia have both had to respond to negativity and abuse from the public at various times. They recognise the increase in “keyboard warriors” and take it in their stride, knowing that they would rarely have to tackle this face to face.
With such a varied role, we asked Mitchell how me managed the 20% off the job training requirement which is a compulsory requirement of any apprenticeship he told us he records any new skills and processes he undertakes and documents the learning and benefits in addition to any meetings and training outside of his role.

Mitchell is hoping to progress onto an advanced apprenticeship within the office, he is positive about the range of skills he has developed in a high-profile role that would be an asset to any employer. 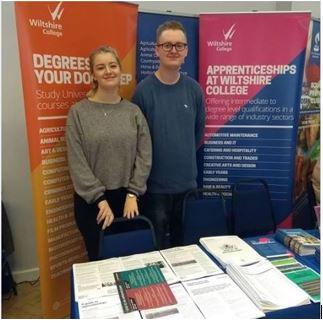